Misconceptions on charge and the charging of objects

Misconceptions on charge and the charging of objects

Scholars from different countries have raised concerns that erroneous ideas on concepts of electricity and magnetism may be communicated to the learners by the textbooks themselves. Every day life might not be the only culprit for learners’ misconceptions. And so, if what we teach our learners is riddled with erroneous ideas, how can we claim that learners have misconceptions…

Listed in what follows are some of the wrong ideas picked up in government approved, South African physical sciences textbooks concerning the charging of objects by ‘friction’ or ‘rubbing’. The erroneous ideas texts seem to reinforce emanate primarily from unscientific reasoning and from failure of authors to acknowledge the primary condition for charge to transfer, which is the need for contact between two objects.

In several texts the rubbed object receives all the attention disregarding the object/cloth which was used to rub it. This is done quite explicitly in some excerpts, as shown in Table WI-1. 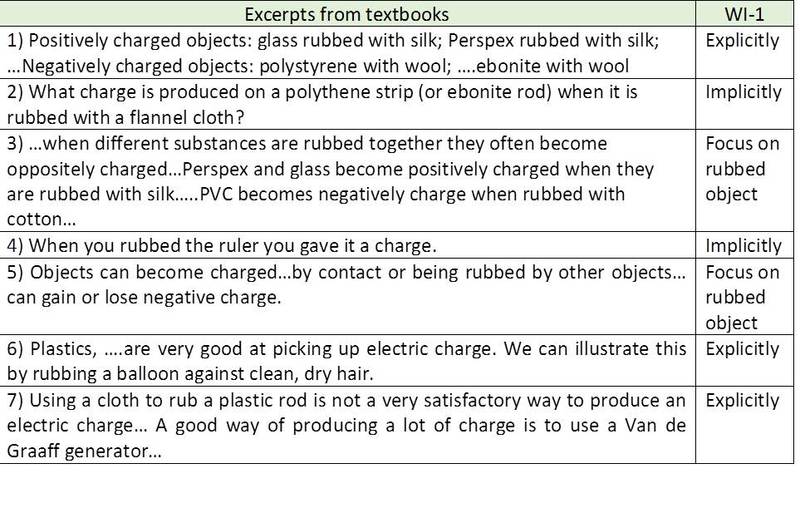 In excerpt (1) apart from confusing the notions of ‘object’ and ‘material’, the message sent is that the charged object is the object that was rubbed (glass or Perspex in this sample). The silk is disregarded and is given the subordinate role of the means to rub. In essence learners are told that rubbing charges one object. A reasonable learner would ask: “why use a silk cloth and not some other cloth?” But no answer is given in the text.

Similar is excerpt (7) or the excerpt (4). Other texts do refer to rubbed objects becoming oppositely charged, but nevertheless the rubbed object is often at the centre of attention, as in excerpt (3).

Wrong idea 2:  The cause of charging is the rubbing or friction

The previous wrong idea further suggests that rubbing (in some texts friction) is the cause of charging. The communicated idea is that the charging process is the rubbing process - it involves an object to be charged and a rubbing action to charge it.

The role of the cloth in the examples is being reduced to that of making the rubbing action possible. Inevitably learners are prompted to perceive rubbing not only as the essential condition for charging, but also as the cause of charging, both of which are erroneous notions. In some texts, WI-2 is promoted explicitly or almost explicitly. All excerpts prompt learners to imagine electrons in insulators as leaving their molecules and moving across attracted by the other material as if they are mobile.

Table WI-2      The cause of charging is rubbing or friction

In excerpt (2a) apart from the fact that neither friction nor rubbing is involved in the charging of the roller and belt (contact and separation of different areas of the objects happen in quick succession without rubbing each other in the process), we note the use of the term “friction”. In the mind of the author friction with its energy connotations is essential, being the cause of charging. Indeed, in excerpt (2b) we find an ‘explanation’ for this notion, through the ‘energy of rubbing’.

In excerpt (4) we understand something along the lines that ‘rubbing dislodges or rubs off electrons from one material and moves them onto the other’. In addition we cannot understand how to link the claim that ‘some atoms attract electrons more than others’, which thus becomes irrelevant. The dominant idea is that rubbing/friction causes charging by moving electrons. Excerpt (4) also suggests an entire separation of positive and negative charge in the atom! This by itself may generate all sorts of unwanted ideas in the minds of the learners.

Wrong idea 3:  Use of empirical instead of inferential causes

This wrong idea links to WI-2. It is not a wrong idea per se, but rather concerns unsuccessful causal reasoning that results in a failed scientific explanation and hence in multiple understandings. The type of causal reasoning communicated in the textbooks can be described as common reasoning.  Let us understand this…. 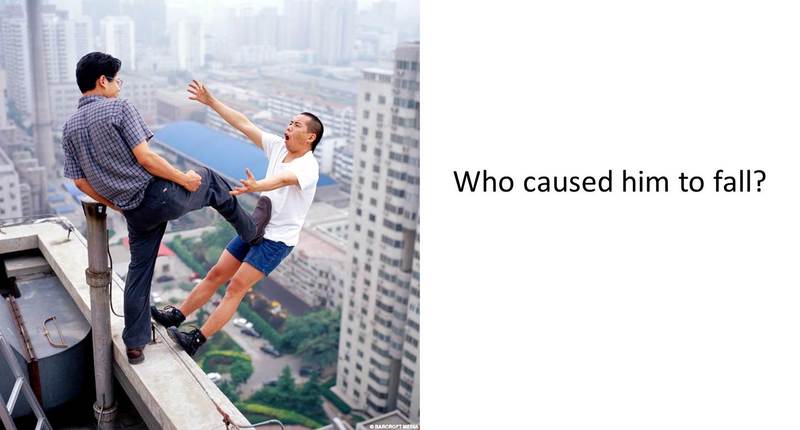 Unfortunately, the cause of a phenomenon is often different in everyday life and in science! In everyday life, the cause of an event is the one that triggers the event. For example, if a person is pushed out of a window, the culprit is the one that pushed him out. The culprit might complain that it was not him that caused the fall, but gravity. Nobody would consider his excuse. In everyday life, the cause of interest is the cause that triggers and enables things to happen. The guy is in trouble! In science, the push is just a trigger cause, not the actual or effective cause. The effective cause is the action of gravity. The push is the common cause. 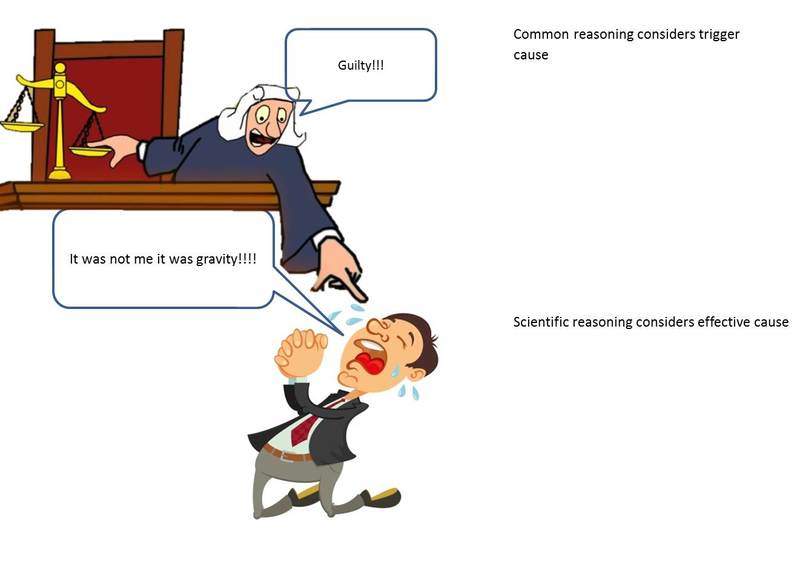 According to the scientific understanding, rubbing is a trigger cause or a condition for charging to happen. It enables the making and breaking of bonds between two surfaces, but does not determine which surface ends up with excess electrons if at all. The efficient cause is the unequal strength by which two surfaces attract shared electrons. And for this to happen, a second condition is necessary, materials must be different (having different electronegativities). Based on the endorsement of a trigger cause as the ‘efficient’ cause of charging, we can say that textbooks have used common reasoning to ‘explain’ the phenomenon of charging.

Wrong idea 4:  Charge is ‘produced’ and charge is ‘created’

The excerpts discussed under Wrong ideas 1 and 2 send the message that it is the rubbing or friction that produces the charge on the rubbed object. In statements such as “positive charges develop on objects when electrons are removed…” and so on, the word ‘develop’ in suggests creation of charge.

The notion of charge creation is particularly pronounced in excerpt (7) in Table WI-1: “Using a cloth to rub a plastic rod is not a very satisfactory way to produce an electric charge. A good way of producing a lot of charge is to use a Van de Graaff generator…”. In several other excerpts we further find that charge can ‘build-up’ on objects. Such expressions appear to conflict with the law of conservation of charge.

Adding salt to injury learners are not introduced to the concepts “charge” and “net charge” as physical quantities. What is the said ‘charge’ that is presented as being produced or developed or built-up on a single object?

Wrong idea 5:  Charges / electrons jump off and are picked up …

In several excerpts learners are prompted to picture ‘charges’ (or electrons) as leaping out of a material and into the space surrounding it or where objects can pick up charge from their surroundings. Such excerpts are listed below: 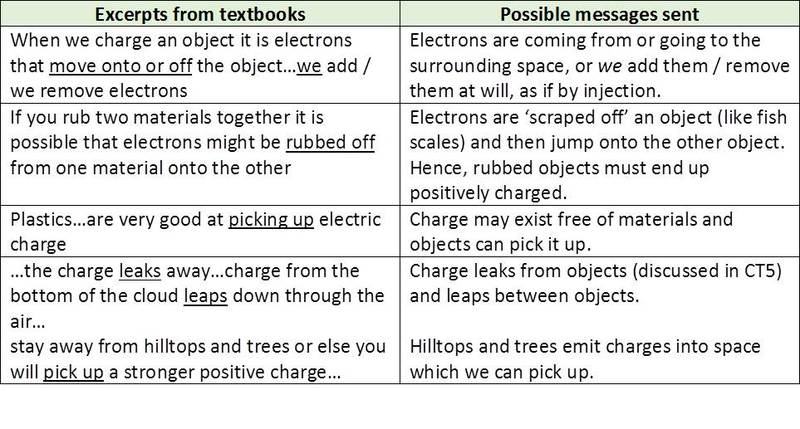 How exactly do learners perceive the “charging of an object” by rubbing is not well researched. The following is an example from the closest reference found, is that of a student who stated “If the straw is not charged, this means that there are neither too many nor too few positive and negative charges. It loses electrons and becomes charged on being rubbed.” A representative drawing is shows a positively charged (plastic) straw, as below. 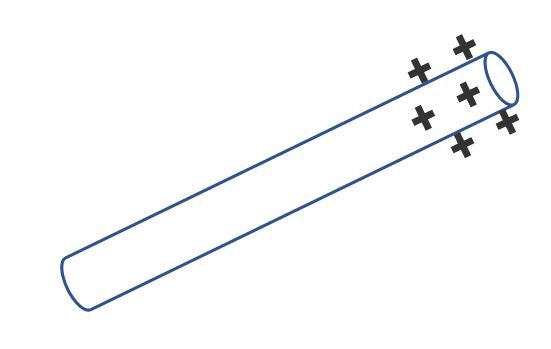 It is possible that such responses emanate from notions of ‘rubbing off’ electrons from an object and the particular student seems convinced that “it loses electrons on being rubbed” hence the positive net charge of the object. A plastic straw should most likely end up negatively charged.

It appears that several textbooks, as in the last example in Table WI-5 do not consider air as a material being in contact with an object and playing a role in the transfer of charge between the two. The message sent is that charge could transfer to and fro an object even in vacuum. This type of examples may lead to the wrong idea that contact between objects is not necessary for charge to transfer.

Excerpts such as “Objects can become charged in many ways including by contact with…” or “The process of materials becoming charged when they come into contact with other materials is known as triboelectric charging” suggest that there are other ways to charge objects which do not involve contact, or that contact is not always necessary. Hence, although texts do not expand explicitly on the need for contact for charge to transfer, ideas regarding contact are communicated implicitly and usually these are erroneous.

Your birth order in the family may have helped to shape both your personality and even your IQ! We all know that firstborns are...

Early Childhood Development, the Importance of Play and the Role of the Educator

An Early Childhood Educator takes a hand, opens a mind and touches a heart.