Interaction Between Learning and Development

Interaction Between Learning and Development

As homeschooling increases exponentially, and many parents assume a differing teaching role, be it that of a facilitator, a guide, a traditional teacher or other, it becomes imperative that major theories of learning become more accessible to them, rather than preserved for educators and scholars. After all, a vast amount of research exists on the matter and this has influenced the course of educational reforms since the 60’s, and perhaps has instigated the trend of modern homeschooling. This article is written in this spirit, hoping that it will provoke some reflection and perhaps advise.

The Chicken or the Egg? 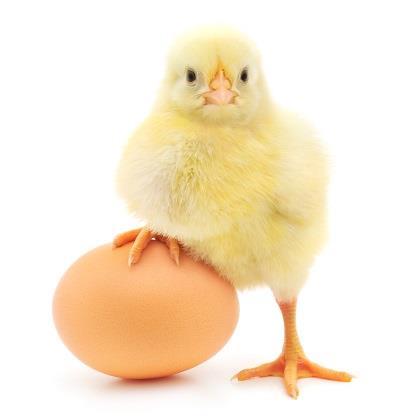 The problems encountered in the psychological analysis of teaching cannot be correctly resolved or even formulated without addressing the relation between learning and development in school-age children. Is it learning that prompts development or is it development that prompts learning? No, the answer is not straightforward! In the domain of cognitive theories (there are also social theories), there are three schools of thought, or should we say… three major theoretical positions on this. Here is a very basic account of them.

It is based on the premise that learning trails behind development - development always outruns learning. Development is a biological process that determines the development of the brain. Therefore, development is a precondition for learning, never the result of it. If a child’s mental functions have not matured to the extent that it is capable of learning a particular subject, then no instruction will prove useful. Its supporters are especially concerned with premature instruction, i.e. before a child is ready for it. This position does not accept the notion that learning may play a role on the development (or maturation) of the child. And so, learning is seen as an external process that is not actively involved in the development. It merely utilises the achievements of development to settle-in rather than providing an impetus for modifying its course. Piaget’s theory had a major influence on teaching and learning for decades and was superseded by theories that sprung from it. 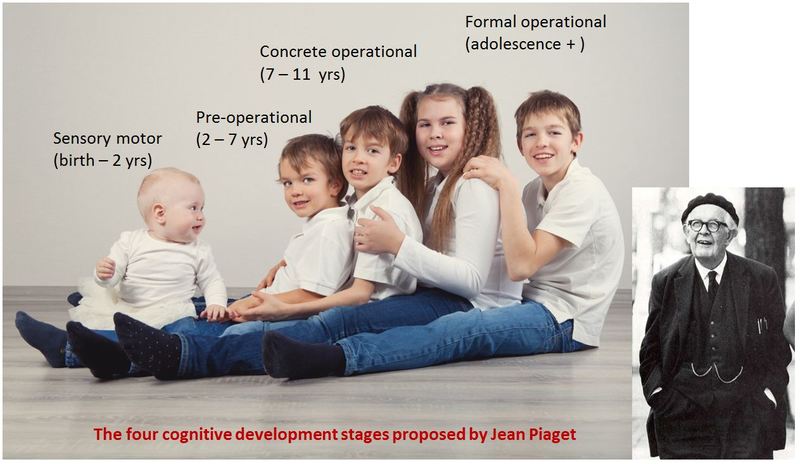 Typified by the reflex theory. It is at the root of behavioural theory, often associated with traditional teaching (this is not a compliment). This position reduced learning to habit formation. “Education in short, cannot be better described than by calling it the organisation of acquired habits of conduct and tendencies to behaviour”. Conditioning refers to a stimulus that initially produces no response, but can acquire the ability to produce one by pairing one stimulus with another stimulus, at the same time, that produces a response. This is what the infamous “Pavlov’s dog” is all about. Development is seen as mastery of conditioned reflexes, i.e. the process of learning is completely blended with development.

E.g. Koffka’s theory (one of the founders of gestalt psychology – gestalt means a unified whole). Development is based upon two different but related processes, each of which influences the other. The one is maturation that depends directly on the development of the nervous system. The other is learning that is also a developmental process. The two are mutually dependent and interactive. The process of maturation prepares and makes possible a specific process of learning. The learning process then stimulates and pushes forward the maturation process.

But cognitive theories are not the only theories of learning.

Lev Vygotsky awakes our eyes to the powerful role of culture and community in learning.  His theory presents the radical idea that our very thought and intelligence did not come out of the blue. They are the product of history and culture.

In teaching and learning this is typified by the “zone of proximal development” or ZPD.

The Zone of Proximal Development (ZPD)

Children’s learning begins long before schooling. Any learning a child encounters at school has a previous history. Learning and development are interrelated from the child’s very first day of life. But school learning differs markedly from pre-school years. It introduces something fundamentally new into the child’s development: the zone of proximal development.

An empirically established fact is that learning should be matched to the child’s developmental level. Teaching of reading, writing and arithmetic should be initiated at a specific age level.

But….two children of equal mental development may show very different capability to learn under a teacher’s guidance. This means that the two cannot be mentally at the same age; the developmental dynamics of the two can be entirely different…

Even the profoundest thinkers never entertained the notion that what children can do with the assistance of others might be even more indicative of their mental development than what they can do alone. 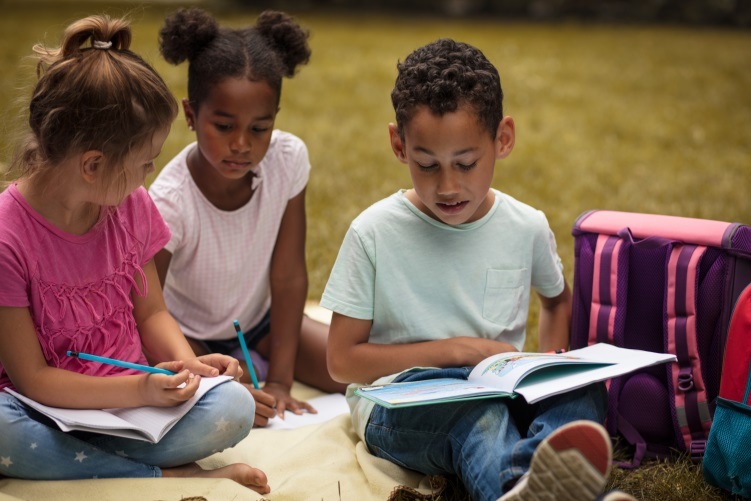 This defines functions that have already matured, that is, the end products of development. If a child can do such and such independently, it means that the functions for such and such have matured in her. 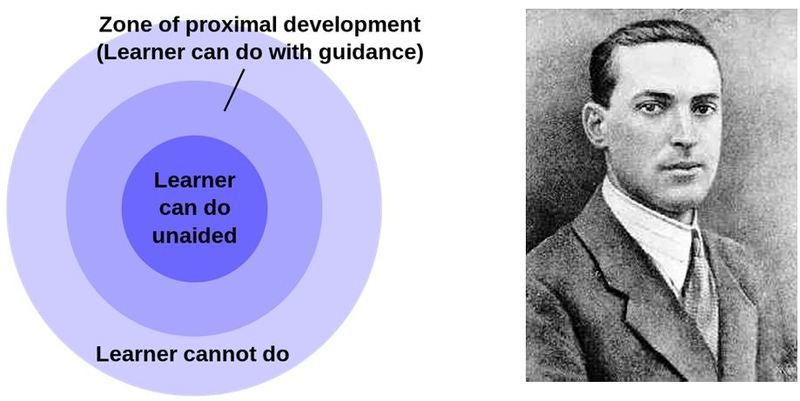 The ZPD is a tool for psychologists and educators through which the internal course of development can be understood.

We can consider not just the cycles and maturation processes that have already been completed but also those processes that are currently in a state of formation that are just beginning to mature and develop. Thus the ZPD permits us to delineate the child’s immediate future and his dynamic developmental state indicating what is in the course of maturing. What is in the zone of proximal development today will be in the actual developmental level tomorrow, i.e. what a child can do with assistance today, they will be able to do by themselves tomorrow. 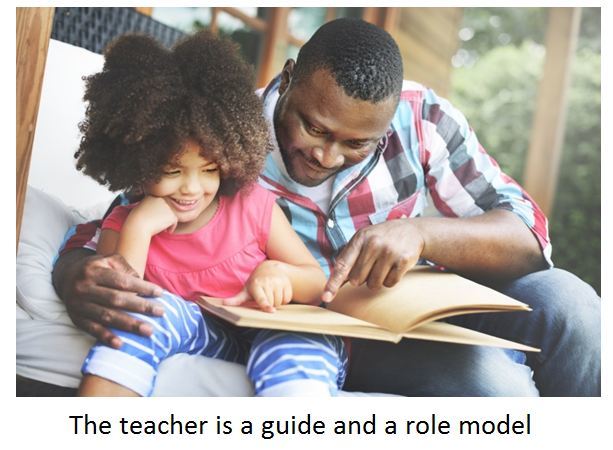 Worthwhile To Think About

We need to re-evaluate the role of imitation in learning, which was thought of as a purely mechanical processes. Children can imitate a variety of actions well beyond the limits of their capabilities. This way they can do much more in collective activity or under guidance of adults. Research shows that a person can imitate only that which is within her developmental level. E.g. if a child has difficulty with a problem in arithmetic and the teacher solves it on the board, a child might grasp the solution at an instant, but not if the teacher was to solve a problem in higher maths. 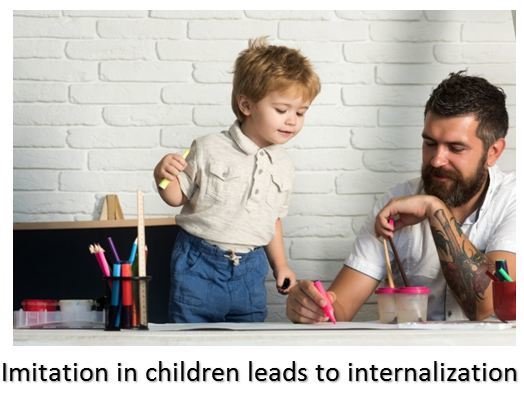 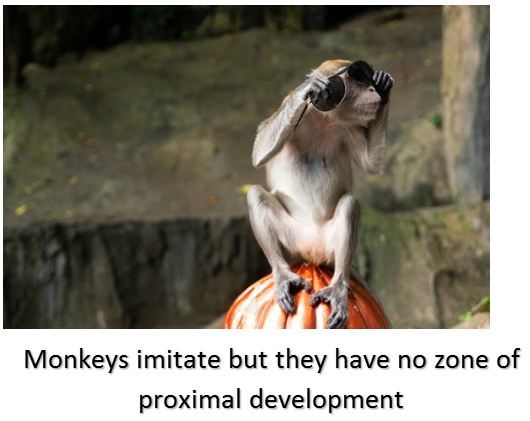 This fact that seems of little significance is of fundamental importance in that it concerns the relation between learning and development.

In children, learning which is oriented towards developmental levels that have already been achieved, is ineffective from the viewpoint of the child’s overall development. It does not aim for a new stage of the developmental process but rather lags behind this process. Thus the notion of a ZPD development enables us to propound a new formula, namely that the only good learning is that which is in advance of development.

Learning is not development. However, properly organised learning results in mental development and sets in motion a variety of developmental processes that would be impossible apart from learning.

Thus, learning is a necessary and universal aspect of the process of developing culturally organised, specifically human, psychological functions.

Here are our top eight reasons for encouraging your child to learn to code.

How can AI have a positive effect on society? We've started the discussion with these 10 ways.

CambriLearn and Fire Tech have partnered up and are excited to present coding courses for kids and teens between 8 and 17.