Video games tend to get a bad reputation for being too violent and creating an inherent violent culture in society. Are there any merits to using video games as tools to educate our children? 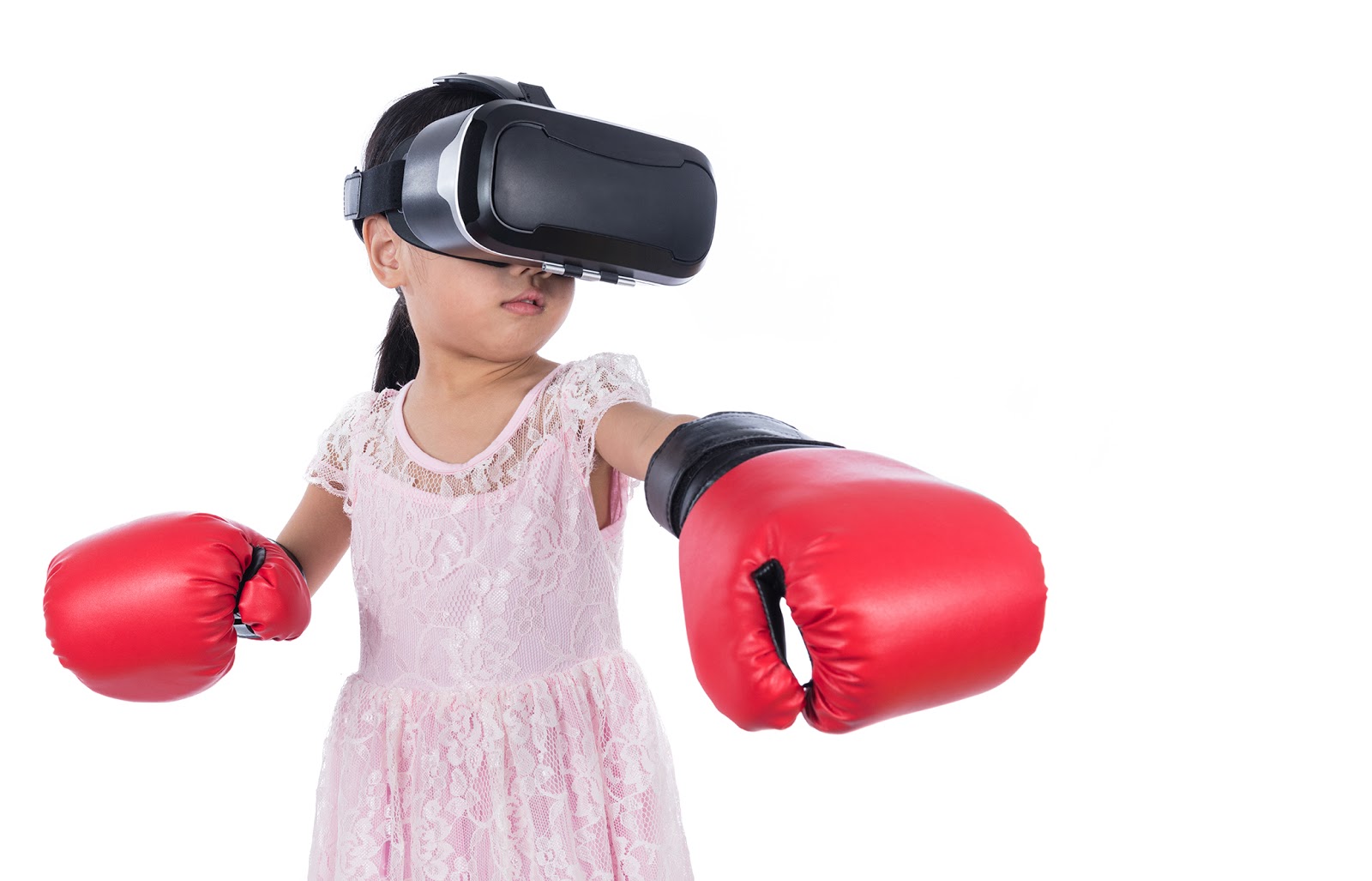 Interactive entertainment is a longer immersive experience than watching a film. I remember reading an article in 1999 on how the gaming industry was slowly evolving to equal the movie-making industry in terms of the buy-in from the market. Gaming allows a person to escape their own world much the same as a movie or book does, but they are now in control of the journey they are seeing on screen.

The merits of gaming as a learning tool can be argued in much the same way as films.

Furthermore, games are easily accessible through the progression of technology. Any of the latest mobile devices have the ability to download games onto it which can then be played almost instantly. This wouldn't be seen as a problem if it weren't for one thing: violence. Videogames and violence have been associated with each other since the late 80s and early 90s. It was due to the depiction of violence that it resulted in the creation of the age restriction rating. If you have to go to any mobile apps store and see the top listed games, almost 80% of those games depict some form of violence. From war combat to cartoon violence, each of these games require your character to kill or harm another living or non-living thing to progress in the game. As a parent myself that is a little concerning. It forces me to raise my guard as to what games I am allowing my child to be exposed to. In retrospect I too grew up with violent games. A simple game such as Mario Brothers is in fact somewhat violent. You, as the character, have to jump on turtles or shoot fireballs to finish the game. Even the more recent Lego games require characters to destroy or kill other characters to finish levels. You, as a player, are also rewarded with “Lego Studs” (a Lego equivalent of coins) that allows one to unlock more content and characters to play with. 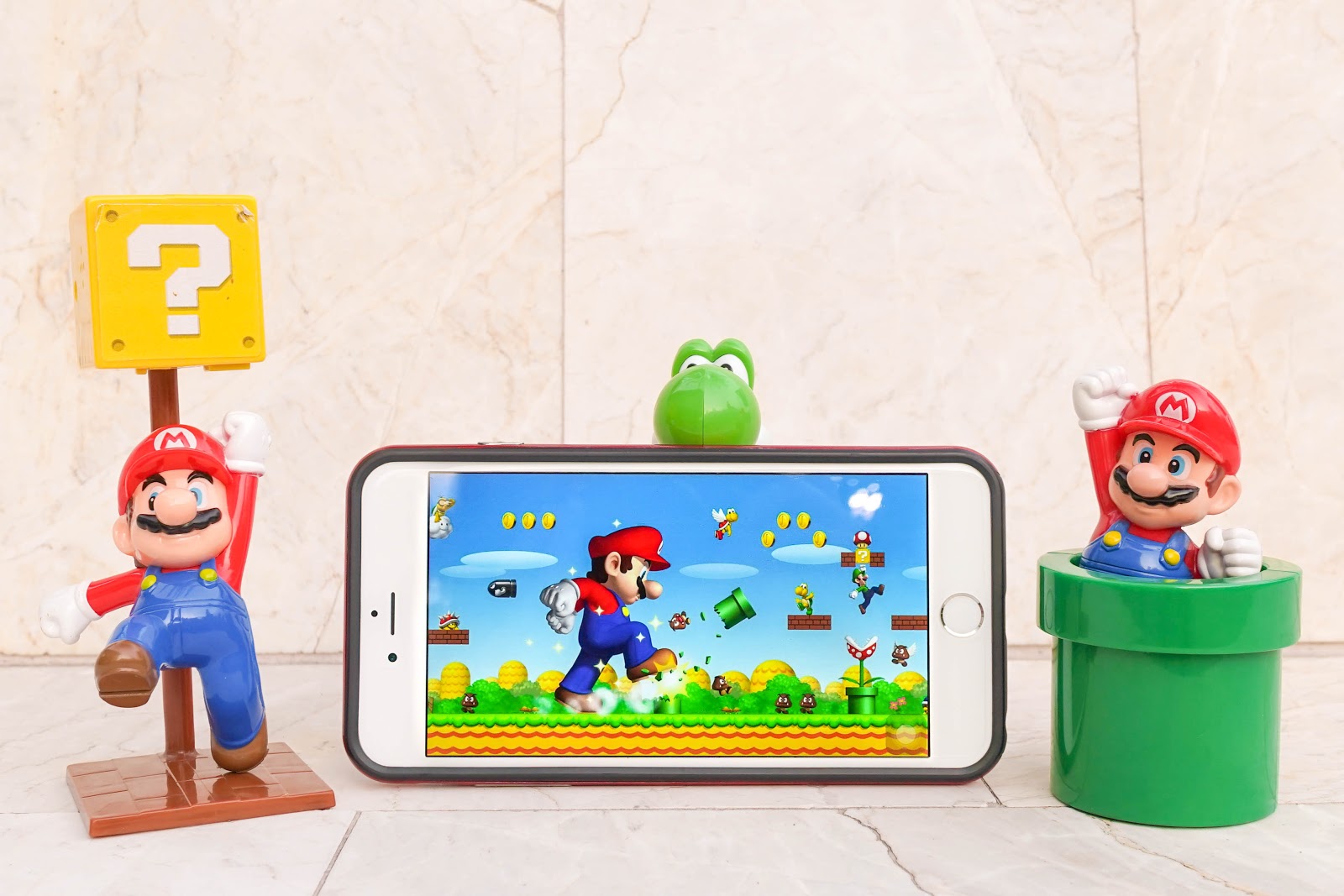 Not all video games are violent. Tetris is a basic puzzle game requiring you to solve puzzles under pressure. Falling blocks need to be rearranged to create lines which create more space. However, with progression in technology the simplicity of gaming allows worlds to be created for us to explore and these inherently gravitate towards a more violent form of gratification. Most of the best-selling video games carry an 18+ rating. Grand Theft Auto V allows your character to engage in the lifestyle of a gangster. The world is open to allow you to explore and engage in simple activities like Yoga or more extreme violent heists. The open world exploration and realistic lifestyle choices within the game, make the impact of the game on impressionable minds a very concerning one.

There is a reason why films and games carry an age restriction. With an increase in graphical and processing power of PCs, consoles and even handheld devices, games are becoming more realistic. With the interconnectivity of devices, it is easier these days for games to be purchased or downloaded. Gone are the days whereby games are kept behind a class cabinet at a store which you will have to ask to open to purchase your game. Games are downloaded in a matter of seconds.

Are games beneficial to learning?

There are many benefits to video games being used to learn from. In one way they provide a more realistic simulated experience that prepares us better for the real situation. They also open us up to creative problem solving.

In my own experience, I have gravitated towards racing games. The primary reason being that they are based on real world events and tangible, relatable day-to-day experiences. We all see cars every day on our daily journeys. We all do not have the luxury of driving all the vehicles that we see. However, in a virtual world we are provided with the opportunity to do so and we are not restricted by limitations of fuel or tyre consumption or the cost of insurance. The tweaking you can make to your virtual car makes this an added opportunity.

Herein lies the learning. In my experience I never really understood cars or how they worked. However, I was interested in them. I would watch the Formula 1 races and enjoy them for the most part, but I didn’t really understand the underpinning of what was going on. As the sport has developed and the difference between cars are so minute, it is hard to find it interesting anymore. Unless you have experienced it yourself! If you know how important it is to have the correct suspension adjustments or tyre selection for a specific track based on the weather conditions; you will appreciate the effort it takes for these racing teams to pull off what they do.

Racing is a costly and risky sport. Hence, not everyone will be able to experience it first-hand or participate in it. In a virtual environment the only limitation that you would essentially encounter is time - time to dedicate to the “sport”. Racing, as part of an online environment, or e-racing has become a serious sport and highly competitive.

Games like the F1 series from Codemasters have a parallel running e-sports event that almost mirrors the seasonal F1 calendar, but in a virtual environment. Gran Turismo Sport is FIA (Fédération Internationale de l'Automobile) endorsed and allows for international competition that adhere to the guidelines that have been set out. 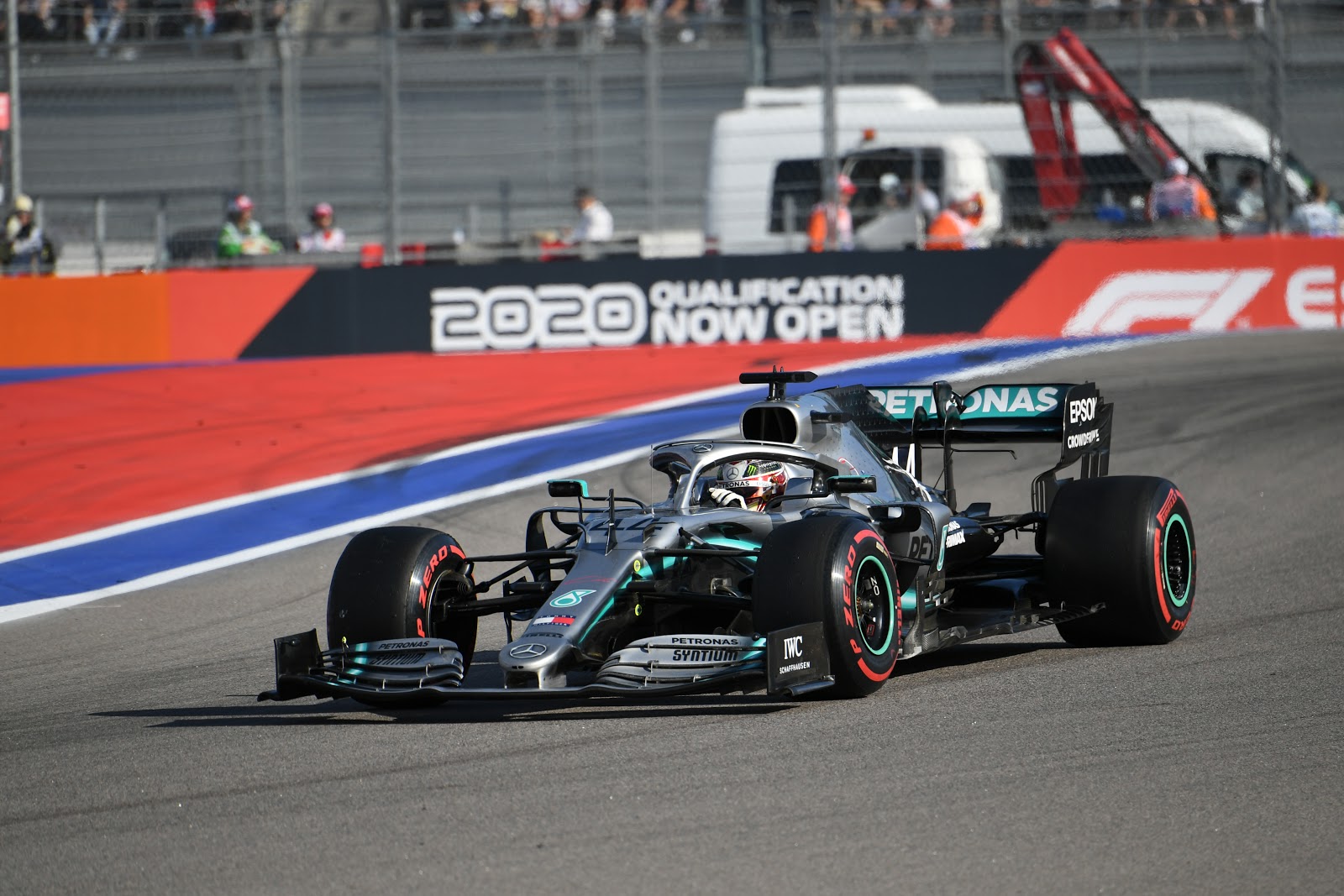 What does the future hold?

The opportunity for racers to move from the virtual environment to the real environment has been created with the onset of racing sports flourishing in a virtual environment. This was experimented with when the creator of Gran Turismo, Kazunori Yamauchi, allowed players who had met the qualifying times set in his game Gran Turismo 5 to part take in the GT Academy. This allowed the winners of the contest to take part in preparation for international races and potentially start their careers as race-car drivers.

The Gran Turismo series in itself is a great learning tool. It not only provides guidelines on how to best modify the numerous cars they have on offer but also provides practical learning tutorials on how best to drive different car types. The practical experimentation of tweaking one’s own car for better performance helps for a creative approach in solving the problem of winning races without spending money on a high-end, expensive car.

There are probably other games out there that do similar things but what makes the Gran Turismo series stand out further, is it embracing new technologies to help immerse the virtual drivers into its world.

The release of Gran Turismo 5 embraced stereoscopic visuals to create 3D visuals that immersed the player into the game more. It also included head tracking with a web camera which changed your visual view-point depending on your eye-line.

These technologies were further developed with the latest release, Gran Turismo Sport having VR capabilities for some of its races. This makes the experience as close to life-like as possible. 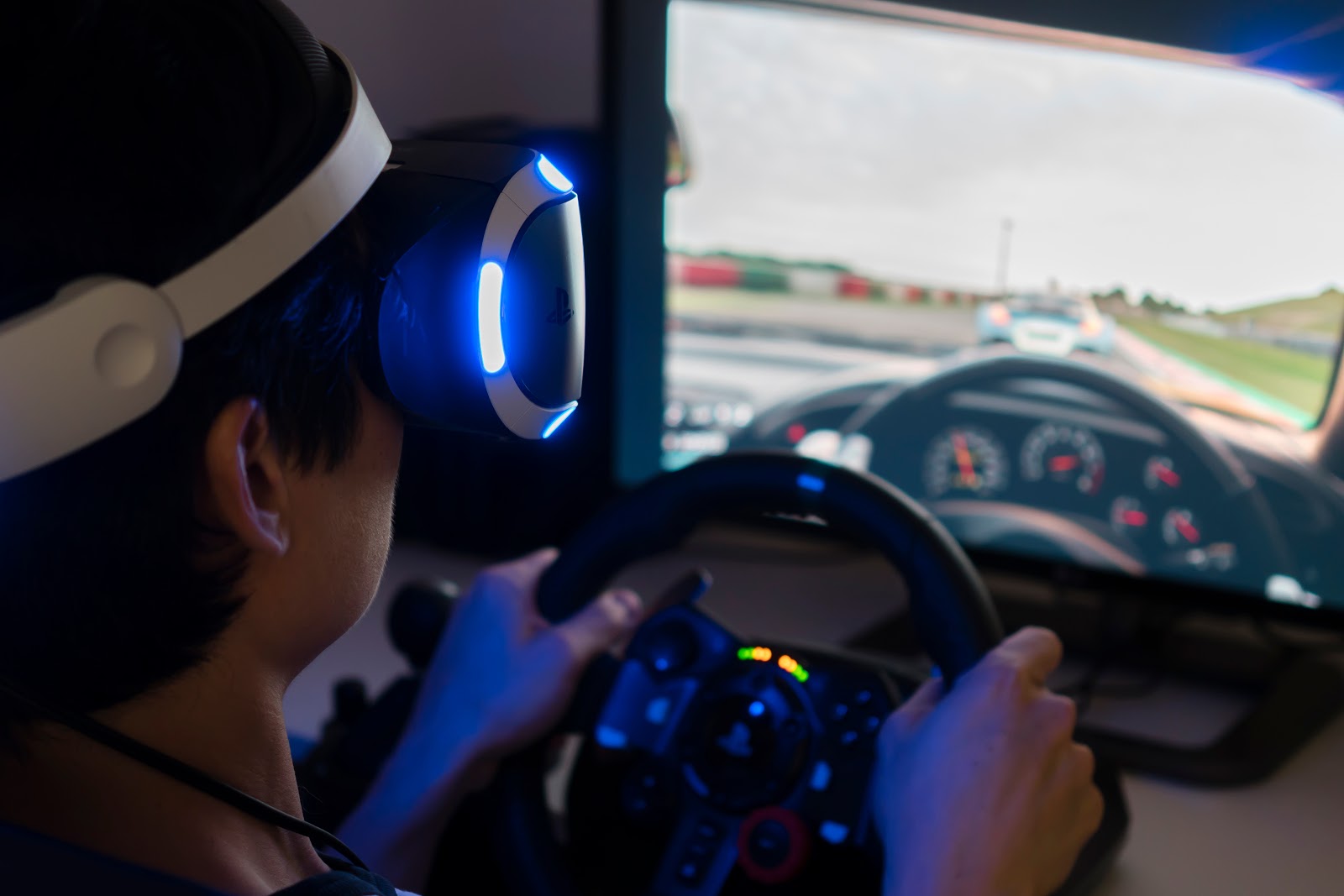 The other benefit that makes racing games a more realistic immersive experience is the opportunity to use more than just a standard controller. Console controllers are immersive in themselves in that they vibrate relating to the game and players experience. This is fine for action based … um…violent games. However, racing took this a notch higher – the introduction of a steering wheel. To truly feel the effects of how a racing game pans out, one should invest in a steering wheel.

The benefit of using a steering wheel is that the feedback is fed into the steering wheel. You can then feel when your car is slipping out of control. As it a tactile learning experience you can learn how to react and apply these reactions in a real-world situation. Granted these are simulated experiences, but they do at least offer a more realistic and safer place to experience it. 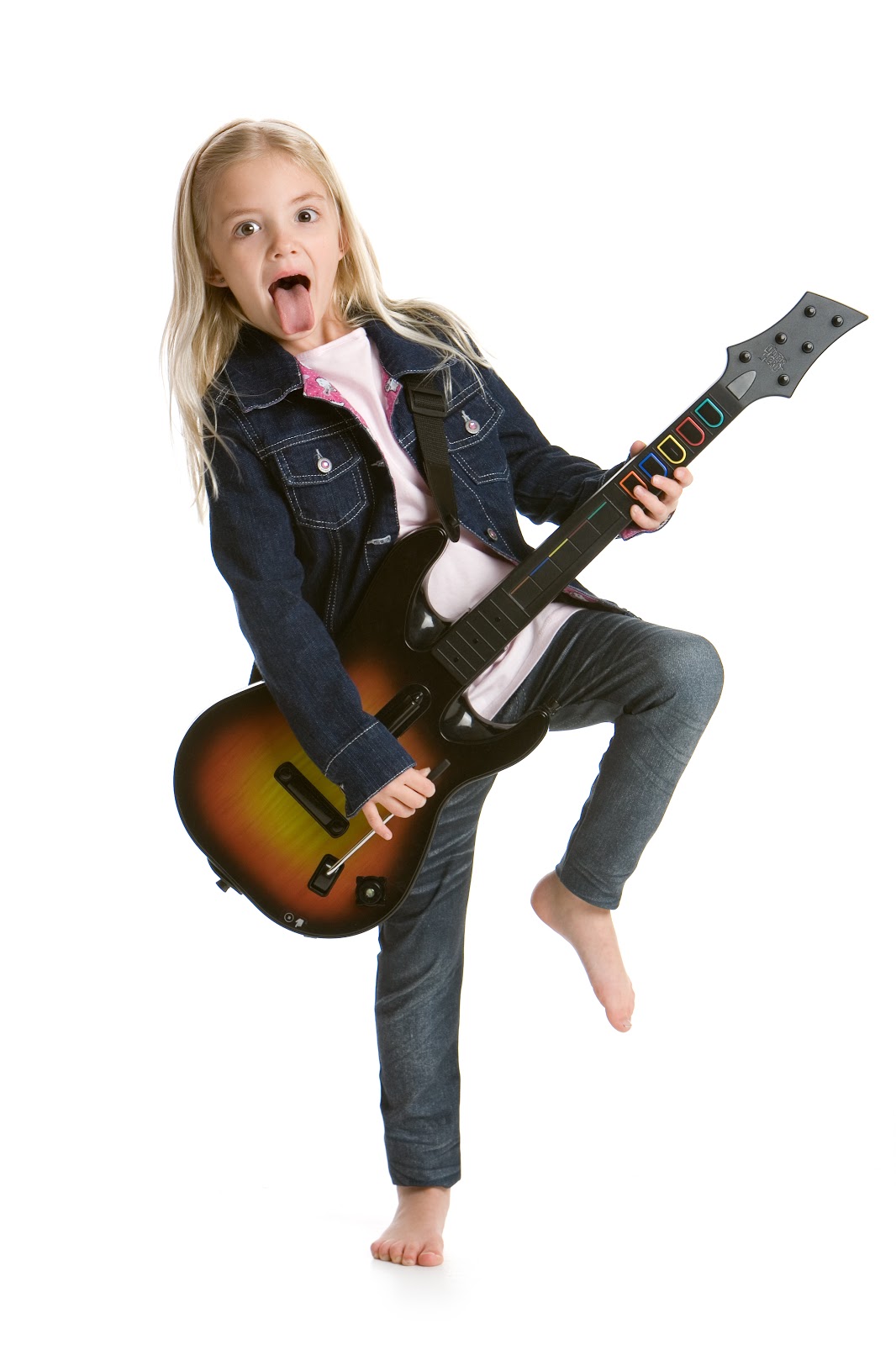 In the early 2010s there was a Guitar Hero and Rock Band craze which allowed gamers to play along with popular rock and pop songs with guitar controllers. These rhythm-based games did not simulate the exact sensation of playing a guitar but provided the idea of it. This in turn allowed for greater music appreciation.

The Guitar Hero craze developed further when players could now plug in an actual guitar to allow them to learn how to realistically play guitar. Rocksmith allowed players to learn how to play the songs for themselves through the game with their own guitar.

The best aspect of gaming with new and emerging technologies is that gaming embraces all of this to its benefit. All games these days have sound that has been developed for home theatre systems. This allows for immersive sound that help make the world that games are set in more lifelike. Gaming tends to embrace new television resolutions and colour technologies allowing for newly developed televisions and other display devices to be used to their full potential.

Gaming, by it’s definition, should be fun. Learning happens best when you are having fun. As soon as you are being bogged down by the doldrum of boring books your brain switches off. By doing something that you enjoy, you learn without consciously being aware of it.

Here is another article highlighting the benefits of Video games:

Racing is also not just a boy’s sport. Here is a clip from one of the top female e-racers:

Here is a video about how close real racing and e-racing really is:

Words can inspire. And words can destroy. Choose yours well. Every word you speak has the power to hurt or heal. One kind word...

Always Look on the Bright Side of Life How an Appreciation of the Bizarre, Quirky and Unusual influences On Your State of Mind Determines the Quality of Your Learning Experience...

Technology has changed this industry. You will be practicing online studying and even with CambriLearn’s assistance, you will...